The crazy projects of Atelier Alain Ellouz: from dream to implementation 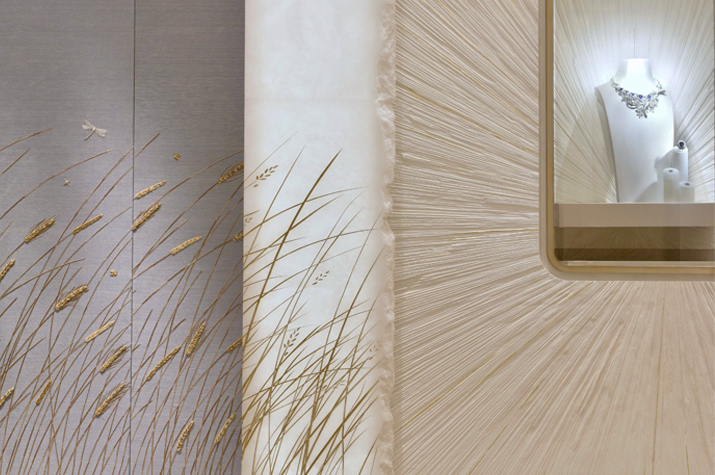 Recently we introduced you to the magnificent Chaumet project that allowed Atelier Alain Ellouz to explore a brand new technique: alabaster engraving. This project initiated by LVMH artistic director and designer Patricia Grosdemange, once again signs an exceptional collaboration with her. Alain Ellouz outlines this meeting born in 2009:

“Patricia is always looking for the best craftsmen. Once she has discovered and understood their talents, she doesn’t hesitate to include them in one of her projects. In 2009, she came to meet us to develop a new concept for Guerlain. Since then, we have worked together several times and each time, Patricia offers us a great playground, allowing us to move beyond ourselves and discover new possibilities with alabaster. It also compels us to look for new techniques and improve constantly, as we did recently on the new concept for Chaumet where we have met two challenges: the alabaster engraving of golden grasses (one of Chaumet signatures) and a sculpture on a Gemstone used to showcase a diadem. ”

Patricia Grosdemange is part of our “family” of designers who knows how to value all the qualities of alabaster. Moreover, Patricia confides that she “never considers one of her design project without a creation around a single material able to transcend it. All the vibration and emotion alabaster contains gives life to the object. ”

Many of our projects have been the results of encounters with great designers. But nothing would be achieved without our workshop’s talents. Alain Ellouz is a visionary, including when it comes to surround himself. That’s how the chief designer Marion Biais-Sauvêtre joined him from the beginning of AAE. According to Alain Ellouz, Marion is the one thanks to whom “big ideas are transformed into real artworks” . Marion has built a strong team of five designers, whom the oldest is Alexis Jouvin, and all together they design the projects and find technical solutions to their implementation. Our design office linked with our research and development team is one of the pillars of Atelier Alain Ellouz.

From dream to reality 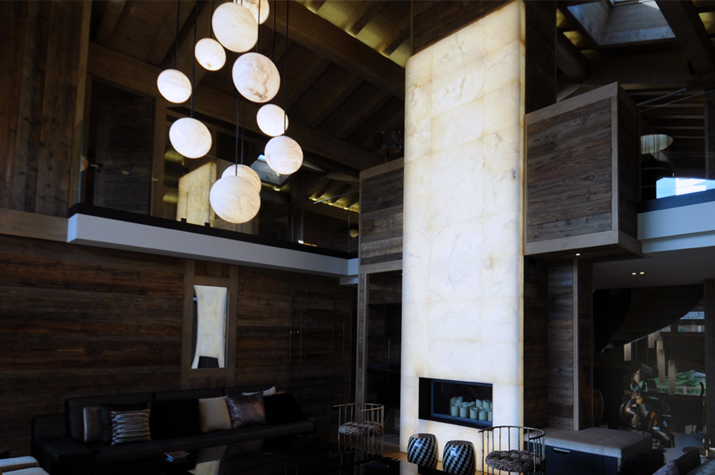 Each project is a new challenge! “We met at least 1300 challenges. That’s the number of projects we have realized since 2006. Each of our projects, big or small, implies a 100% commitment“, says Alain Ellouz.

We light up your dreams, even if sometimes dreams can be a little foolish and then become a real challenge. Thereby Atelier Alain Ellouz realized a 10 meters high alabaster wall, a dance hall for the Cogemad (specialist of the renovations of prestigious places), a 1100 kgs chandelier hanging on a sunroof for the designer Lydia Melbourne (Wainbridge) or an all-alabaster elevator as well as its 26 meters high stairwell for Morocco’s King’s Palace in Rabat.
We have also met a great challenge with the famous designer Philippe Starck, for a project involving the creation of a 8 meters long alabaster table weighting and no less than 1400 kgs, all resting on feet supporting only 200 kgs! Luckily the ingenuity of our designers combined with our know-how made it possible and we were really proud of realizing a table as massive as seemingly light.
In 2012, Atelier Alain Ellouz even had the privilege of being approached by Brad Pitt for whom we created ten huge alabaster chandeliers.

Through all these great projects, alabaster rubs the sublime and sometimes even movie stars!

After Paris and London, Alain Ellouz has opened his third showroom in New York in Soho which is a great opportunity to develop new projects across the Atlantic. New York, and more widely the United States, represents a new playground as exciting as demanding.

“New York is the place to be for workshops like ours. Here everything has to be seen in a big way! We have only been there for 8 months but I already feel like being part of the family! Americans are really fond of alabaster and rock crystal. They do love our lights and have adopted them right away in their projects. The designers are very demanding but so are we! We were meant to get along ! ”

Atelier Alain Ellouz continues its great adventure in the world of luxury and design. In 2019, two major projects should take shape. But for now we keep the surprise…

ICONIC, the new family of alabaster lighting elements in a full range of designs
23 September 2021